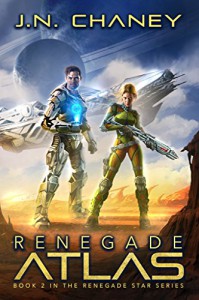 Do you guys remember the show Knight Rider and the AI, Kitt, that was installed his car? Well the main character in this series, Jace Hughes, has an AI in his spaceship named Sigmund aka Siggy and he's so cool! He's like the star of the series.

I have some good memories of watching Knight Rider and Indiana Jones and this series is like a cross between the two but set in space, so I'm enjoying it tremendously. But if you're not a fan of over the top, outrageous action scenes then you might want to find something else because this is pure entertainment. You really have to be willing to believe the unbelievable as they say.

I listened to the Publishers Pack audio version and the audio performance made the story come to life even more. There's no audio for books 3, 4 and 5 though which completely sucks especially after hearing and loving the narration in this book.