Sinking of the Whaleship Essex... 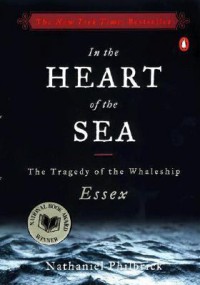 In the Heart of the Sea is a true story about the Essex, a Nantucket whaling ship and its tragic encounter with an angry, revenge-seeking sperm whale. Since the movie was recently being released, my friend Eva and I decided to do a buddy read together. I'll admit I was impressed with the amount of research, details and extraneous information the author included about whaling, Quakers, Nantucket, shipwrecks, you name it. However the first quarter of the story was bogged down with so many facts and recitations that the story itself floundered and it became a little dull and boring. After the actual sinking of the ship though, the story did a complete turn around and I was engrossed until the end. I think because the author focused more on regaling us with the story of the ship and the crew and their dreadful time surviving at sea instead of inundating us with historical facts. If you have an interest in whaling or the Essex whaleship, I would recommend reading this book. There is just a ton of fascinating information. You'll be surprised at not only how long and how far the crew had to travel in an open whaleboat but what they had to do survive while they were lost at sea. It's a pretty horrific story. It will definitely make you think twice about going on your next cruise or fishing expedition. I personally will be land bound for a while, if not forever.