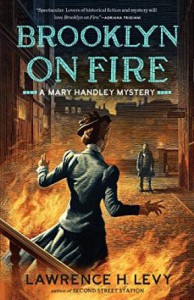 I ended up dnf'ing the first book in this series because it was incredibly boring but I won this second book, Brooklyn on Fire, before I started the first so I was hoping it would be better since Second Street Station was Levy's debut. Well unfortunately I didn't care for this one anymore then I did the first. It again was boring and the writing and story just didn't flow well to me in either book. I also felt absolutely nothing for any of the characters so I'm calling it a wrap and moving on to something else. It may be that this series just isn't for me so if you read it, I hope you enjoy it more then I did.

*I received this ARC from Goodreads FirstReads in exchange for an honest review. Thank you!